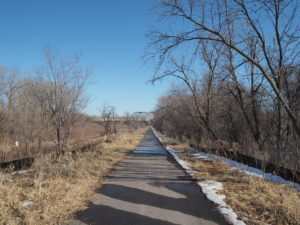 The first photo was taken Friday afternoon around 4:00 pm from the end of the Old Cedar Avenue Bridge on the south side. “Friday afternoon” as in 72  hours from the time of this post.

The second photo was taken around 2:30 pm Sunday, March 24th from virtually the same place.

Only you can stop this. Only you can persuade those that represent you in Minnesota State Government that this is a boondoggle of epic proportions. If every person who follows this effort on social media called or wrote their representatives today we would have a better chance of stopping further funding. Do it. Today. Please.

P.S. The river isn’t done rising. It will get much worse before the river recedes.

We are a group of dedicated cyclists, trail runners, hikers, nature enthusiasts, and tax paying citizens who believe that it is fiscally irresponsible to build a paved trail in a flood plain. We would like to see the MN River Valley Bottoms remain a natural area with natural trails. We are working hard to make people aware of the proposed trail. We have created a petition for people to sign in support of keeping the MN River Valley Bottoms in the natural state they are in.